OUTLANDER'S FRANK RANDALL: RACIST OR REALIST? *BONUS: Diana Weighs In With The Facts

Many of the fans that Diana Gabaldon calls the anti-Frank crowd, site the phone calls from women that Claire receives, who tell her to leave Frank and their marriage, as proof of his infidelities. As I do NOT believe that Frank was a cheater, it just occurred to me why they may have called her: we know that 'everyone thinks she is having an affair with Joe Abernathy as they spend so much time together' (as Franks says in Voyager Chapter 19). This is why I believe these curious phone calls are either from:

2) women who simply admire him greatly and want her to leave with her scandalous black lover and stop shaming him and ruining his reputation...and making fool out of him.
This could also explain what he meant when he said being with, or having an affair with a black man was 'dangerous'. His saying that 'being overprotective of Bree was better than having her 'fucking a black' man sounds more like bitter jealousy, deep anger and real fear...and not racism. After all, he didn't say the 'N' word and racists certainly do and did, especially in those days. Nevertheless, many do say that this is the point they lose all respect for Frank. If they had any to begin with, that is.

I don't believe it is in Frank's honorable and decent character to be racist, even though racism was utterly commonplace in those days. In 'Leaf' we see Frank as a man of great character, intelligence and sympathy who can speak other languages (even if just a bit) and feels for the Jews and the soldiers of any ethnicity keenly. This hardly seems the type of man to harbour racist or prejudiced values.

Black and white couples could be and WERE beaten, jailed and murdered in those days and marriage was ABSOLUTELY out of the question. For example, In 1958, an interracial couple were torn from their beds at night in their own home and slammed into jail when the police discovered they had married.
*See this link: INTERRACIAL RELATIONSHIPS THAT CHANGED HISTORY

By 1966, things has improved but not by much (it wasn't until 1967 that all the States in America made interracial marriage legal)...as we can sadly attest to even today.

If Claire was thrown in jail because of her love affair with Joe, what would happen to Bree? Both of their reputations? Bree's future? What if things escalated and they were attacked or abused? And could it be that THAT was the reason he needed to go to England and take Bree with him...and even dare to hope Claire would follow?

Indeed it could. In fact, if we do find out later that Frank is not in fear for Bree's (AND Claire's?) safety because of his MI6 Secret Agent involvements concerning Time Travel and other nefarious reasons, it may be simply that he felt he had to save his daughter's reputation and shield her from the stain of her mother's shame and reckless love affair...again...just like he did in 1948.

So, in closing, let me reiterate, I do very much believe that Frank was/is not the racist he is thought to be (another red herring Diana? GAWD WOMAN...I am getting full! Can't eat herring again if I tried... *wink* ) and was really just worried for the safety and reputation of Brianna...and even of Claire, who we know he loved until his dying breath. He spent his life keeping them safe.

And this then begs the question, what does it say about us for jumping so quickly to the conclusion that someone saying 'a black man' in any kind of angry sentence is racist, without thinking about what else they could mean. Am I racist if I say 'I don't like Eskimo Pies'? Or, 'Hey Officer! That Ukrainian Canadian guy just stole my purse!'. Sometimes it is just a description for a specific purpose.
*and yes, I am Ukrainian Canadian and that guy who stole your purse was probably my brother. Sorry. He doesn't get out much.

Joking aside, it is terribly easy to fall into an opinion skewed by one's preconception of a character...but you can now see, I hope, that maybe the problem is with us, not Frank.

ADDED: Many thanks to Beth Trogdon Allen for this copy of Diana's opinion of Frank's perceived prejudice and racism, and why he is NOT either: 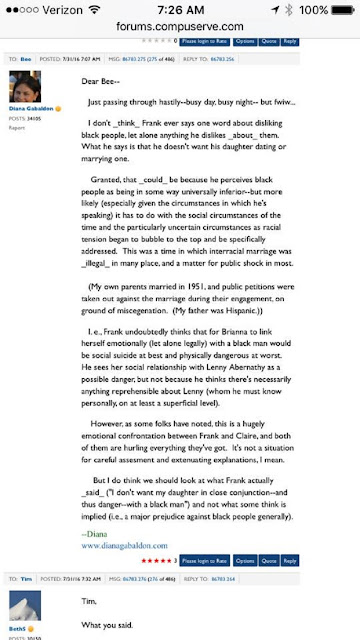 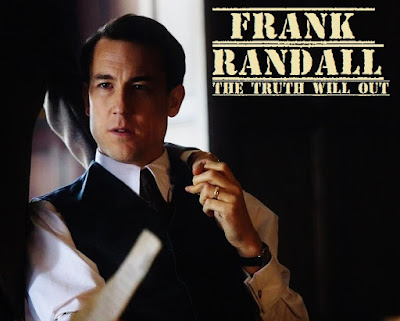 Posted by DeniseSF at 10:10 PM 4 comments: Links to this post