Around 1995 when I was in my mid 30’s, I was diagnosed as having Grave’s Disease (a catchy name that offers such hope and comfort) which is a type of hyperthyroidism. Apparently I’d had it for many years, but doctors in the 70’s and 80’s were usually suffering acid flashbacks from the 60’s and often missed things like this. Gym teachers were just as clueless I guess, as I recall our class once took our collective resting pulses and the teacher, upon seeing mine was 110, laughed and joked, “What boy are you thinking of, eh?”

Imagine that! What I thought was love at first sight (about twice a day) was only an undiagnosed medical condition. How droll!

As an adult, the symptoms lay hidden in the chaos of perpetual pregnancies and the constant chasing after multiple rugrats. I ate like a horse and stayed slim. Why mess with that?

Among the dozen symptoms, most of which I had, the most life altering were difficulty sleeping and extreme body heat; I used to walk around in runners without socks in -40 degree winters and nobody thought twice about it. I was called The Human Furnace (I was hot before Paris Hilton made it a catchphrase). I do thank The Fates though, that I did not have the one very conspicuous symptom that 50% of sufferers acquire: exophthalmos (protruding eyes). The actor Marty Feldman had it but it actually helped his comedic career! 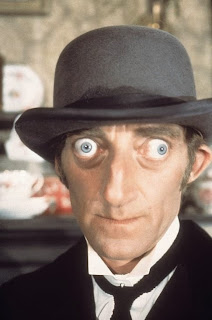 (*I was never a raving beauty but I don’t think I could have scored half the beers and shooters that eager Romeos bought me on the weekend if I’d looked like that!)

It all started one afternoon when I took my eldest son to see Darroch, our family doctor and good friend, and he looked at me quizzically and pointed to my throat...

Darroch: I don’t think singing in the choir is supposed to give you a big lump on your throat. You have a goiter.

Denise: I disagree. It looks more like a crocodile than an alligoiter.

He referred me to an endocrinologist near Vancouver...a LONG way from Dawson Creek, my Northern BC home. I didn’t want to go because I felt perfectly healthy. My throat may have been a bit lumpy but nothing a 200$ silk scarf couldn’t fix. Besides, it would be too expensive and troublesome to fly down for just a silly 20 minute exam.

Alas! The Fates would not be thwarted.

The next day, Murray, a good friend who flew up monthly from White Rock to work as an Oral Surgeon out of my then-husband’s dental office, told me about some tickets he’d scored.

Murray: I was working on a patient in the hospital last week and the anesthetist looks up and says, “Does anyone here like that Pavarotti guy? I have some tickets for his concert and don’t want them.” I got them for half price at $400.00 each! Do you want one? Dorothy will take the other and you can go together.

Denise: Holy shit, YES! (I am nothing if not exceedingly eloquent)

I booked my appointment with the specialist to coincide with the concert and a couple of months later, I was on my way. I met at length with Dr. Mary Blair, a tall, distinguished looking woman who told me that I had handled my disease amazing well:

Denise: Thanks. I do feel quite fine actually. I have four active children and a hectic schedule so can I just leave well enough alone a carry on as usual?

Dr. Blair: Sure you can. But your heart is beating 10 times faster than normal and if you chose to do nothing, you will probably be dead by time you are 50.

Denise: What time is the surgery?

I was a little shook-up with the image of my impending doom clearly formed in my mind’s eye, so to lighten the mood before I left, she tried a little small talk...

Dr. Blair: So... enjoy the concert tonight! I'm going as well, so maybe I’ll see you there?

Denise: You’ll find me easily enough. I’ll be the one stripped naked and screaming, hanging onto Pavarotti’s legs onstage.

I guess I wanted shake her up with a nice little image for her mind’s eye too.

I put the fear away for later and that night, Dorothy (Murray’s lovely and accomplished wife) and I went to see Luciano Pavarotti and it was worth every penny. To add to the excitement, I was even shushed at one point by an elderly couple who looked so rich that they brought their servants to turn their program pages for them. Thurston Howell III and Lovey from Gilligan’s Island lounging in $800.00 seats. Back in Dawson Creek, I was a well-to-do dentist’s wife but in Vancouver, I was one of the Clampett’s, thrilled that my hotel had a cee-ment pond.

A week or so later, to avoid surgery, I was advised to try to kill off my overachieving thyroid (the only part of me, physically or mentality, that had a desire to work harder than it should, I might add) with Radioactive Iodine. I was told I would be considered ‘radioactively contaminated’ for 24 hours and should stay alone for that period of time and for three days afterwards, I should avoid children, pregnant women and flush twice. It did not inspire confidence. Little did I know that inspiring confidence was not their strong suit and soon to hit an all-time low.

I was led into a small room with white walls, doors and floors that was barren save for a small metal stool in the corner. Sitting on the stool, I was given a lead-lined bib the size of a washcloth for me to place over my chest. I was informed that I would be given Radioactive Iodine to drink and it would be colorless and tasteless.

What happened next can only be truly appreciated if you are familiar with The Simpson’s.

The door opened and a man (I assume it was male and of my own species) dressed in white from head to toe, walked in and closed the door slowly behind him. Imagine Homer Simpson in his radioactive work suit or an astronaut: stiff, lead-lined bodysuit with rounded, shoulder-length headgear that covered the entire head like a Star Wars Trooper, sporting a small rectangular viewing window. His/Her/It's white boots looked thick and clunky.

Walking towards me with his arm straight out, as far away from his body as possible, he wore thick white lead-lined gloves that looked like massive BBQ mitts. At the end of the mitt he was holding long silver prongs that looked like an extended hotdog holder and at they very end of those, was a small glass vial of clear liquid.

Sitting there in my jeans, open-toe sandals and short sleeved T-shirt I clutched my lead-lined postage stamp over the general area of my heart and started to laugh. You know, that ‘I-am-so-fucked’ giggle that comes out when you know you’re in way over your head..

Denise: (in a nonchalant, joking voice) Should I be worried?

Homer: (in a muffled, robotic tone) Drink this.

Denise: With my bare hand?


I admit, being left alone in glorious, uninterrupted silence, blowing dust off of movies not meant for innocent eyes and eating my favorite pizzas (slid under the door) was a treat at first, but I soon missed not being able to kiss my kid’s amazingly smoochable cheeks, and it ruined what should have been a fabulous, glow-in-the-dark holiday.
Posted by DeniseSF at 11/30/2010 12:13:00 AM 4 comments: