*Click on pics to enlarge if it pleases you

1) CAITRIONA BALFE RIPPED HER NEW DRESS WITH HER BARE TEETH 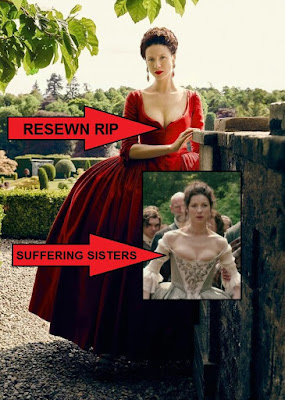 Costume designer Terry Dresbach does a wonderful job at creating amazing Outlander wardrobes, but after Cait spent her Wedding in Season 1 with her breasts squished up to her collar bone like a couple of flattened hamburger patties, she went ballistic when trying on her gorgeous red Parisian dress and saw that she was in for another boobmash. She belted out in a very Braveheart-like war cry and screamed ‘FREEEEEEDOMMMMM!!’ then ripped the centre bodice seem open with her teeth (she credits her long, elegant model’s neck for giving her the flexibility for doing this WHILE wearing the dress)

She is quoted as saying that ‘The Sisters need to breathe godammit!’ Terry skillfully stitched up the raw rip with a silk trim and the results made everyone happy. Especially said Sisters. 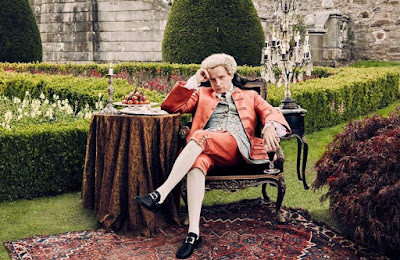 New to the series, actor Andrew Gower was so overwhelmed by his good fortune and the intense scrutiny of the Outlander fandom, he continually forgot to identify himself correctly during shooting one pivotal scene. The line: "How dare you! I am Prince Charles Stuart and care not for broiled shrimp!” was brutalized over and over again with mistakes like “I am George Washington and care not…” and “I am George C. Scott and care not…” and “I am Dolly The Sheep and care not…” which enraged producer Ron Moore so much that he sent Andrew to his chair on set and told him to sit there until he remembered WHO his character was.

After being seated for 19 hours (seen here dejected at Hour-18 at 8:00 a.m.; candles still lit despite the morning sun having risen) Andrew jumped up with a wave relief on his face and shouted, “I am Bonnie Princess Charlotte and care not for soiled shrimp!” 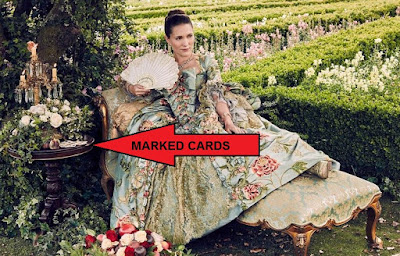 Although the book does not call for it, actress Margaux Chatelier, who plays Jamie’s ex-girlfriend, the beautiful temptress Annalise de Marillac, asked producers of Outalnder if she could play her entire part completely naked. Starz declined the generous offer, citing how many lovely gowns had already been created at great expense, as well as the issue of various ratings laws/restrictions, but the serious method actress demanded her style be respected. Finally, an agreement was made that whoever lost a game of Reverse Strip Poker, would have to stay fully dressed on set.  Ron Moore, his wife Maril Davis, Diana Gabaldon, her 4th husband Doug Watkins, Terry Dresbach and Margaux stripped naked and played for only 40 minutes before Margaux was fully dressed, to which they all got dressed and shooting began immediately.
*Margaux does not know, however, that marked cards were used (seen in the photo on the side table) and readily available as Tobias Menzies had demanded the same nudity provisions whenever he wished for them…and won. They were his cards. 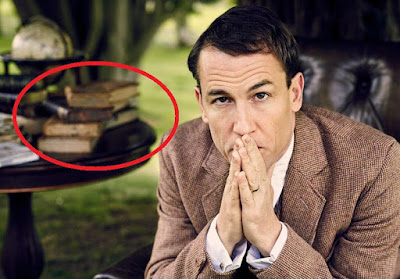 Known to the Outlander Fandom as the serial torturer/rapist Black Jack Randall, and atheist/historian Frank Randall, Tobias is seen here looking up just as he is finishing one of his thrice-hourly prayers. He is seated next to his collection of antique Bibles (seen on the table just behind him). Known also as Pastor Toby, he is an ordained priest and was the founder and former pastor of The Ishityounot Church of The Green, Swanwick, Derbyshire, United Kingdom. *Interesting Notes: 1) ‘ Tobias (Τοβίας) is a Greek version of the Hebrew biblical name "Toviyah" (טוביה), meaning 'The goodness of God‘ 2) Tobias has a dog named ‘Hircanus’ (google it…a coincidence? Ithinknot!)
Asked how he comes to terms with playing the dual roles of such an evil man, and such a spiritually lost man, Tobias says he simply sees them as the Devil…both of them, and his portrayal is a Public Service of sorts in that he shows his congregation just what the Devil can look and act like. He adds that he is normally very shy and mild-mannered but the Power of The Lord (HALLELUJAH!) fills him with enough Love and Righteousness (AMEN BROTHER!) that he can fake-rape and pretend to enjoy torture at the drop of a hat (HALLELUJAH!), which he says comes in handy on Bingo Night.

5) STARZ INSISTED 'MOTHER HILDEGARDE' BE PLAYED BY A REAL NUN 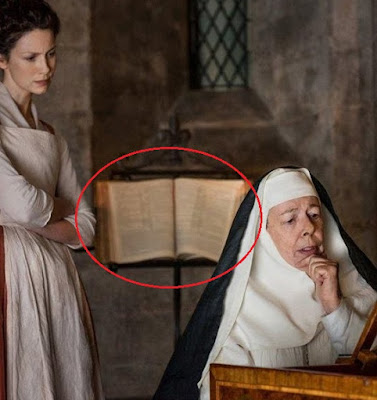 The delightfully flirtatious Frances de la Tour won the role of Mother Hildegarde only after promising to divorce her husband, renounce any other Faith AND refrain from shaving her legs and armpits for 6 months. Then, in accordance with the Church, Frances had to become a real nun. Starz, in its near obsessive need for authenticity demanded any actress vying for the role sign a 972 page contract outlining their commitment and legal obligation necessary for the securing part.

BY THE WAY: The 5 'facts' discussed on this blog may actually be a bit off, if not downright fiction, so DO to take it all with a grain of salt. Preferably from the disintegrated body of Lot's wife. Bloody hell! Can't seem to shake off the biblicaliness from the last two entries...! Ah well!
*scoots off to pour herself a big glass of sacramental wine*
Posted by DeniseSF at 3/12/2016 02:53:00 AM 6 comments: