SEASON 3 OF OUTLANDER WON'T BE SHOWN UNTIL SEPTEMBER 2017! DELAYLANDER HAS BEGUN!

The words were like Geillis' nails gouging out the eyes of millions of shocked fans.

Ear-splitting laments echoed throughout the fandom, reverberating off the rafters of broken hearts...gutting the Faithful.

After a LOT of stealth undercover work, bribery and MI6-like maneuvering worthy of Captain Frank Randall himself (my not-so-secret-crush)...I got the poop scoop on WHY the delay.

Don't shoot the messenger, but here are the outrageous reasons we have to wait: 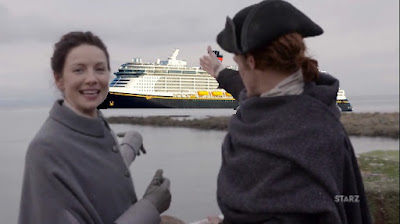 It didn't seem to matter where Ron Moore and Starz decided to shoot...the die-hard fans found them out. NO secret location was secret enough.

Paying up to $1,000.00 per night, hundreds of fans boarded 'OutCruises' ships and bellied up to the show filming sites like drunks to a free-beer bar, and not only gawked, screeched and took millions of illegal photos, a few escaped the confines of the fanships and snuck into the private dressing rooms of Sam, Cait, Tobias etc... when they were off taping scenes and tried on their underwear (sometimes cutting off bits for mementos). Too many interrupted takes and too many holey undies would set the crew off to another location.

It took 21 different locations to shoot this season, where only 4 had been allocated.

Victoria's Secret and Fruit of the Loom unmentionables were bulk-shipped in as well.

2) SAM LOST HIS VOICE FOR 5 MONTHS 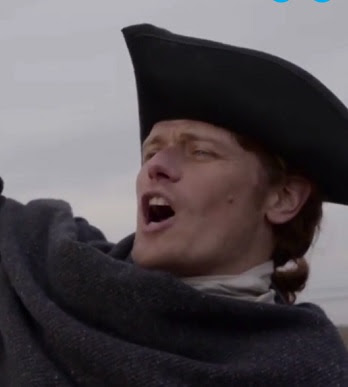 A combination of yelling at OutCruise Fans to bring back his underwear as they scampered back to the fanships, plus a special scene where Jamie Fraser sings a robust aria from Doneztti's 'Daughter of the Regiment': 'Ah mes amis - Pour mon ame', set the scene for Sam to completely lose his voice. We could not obtain a recording of Sam singing, but here is Pavarotti with his much quieter rendition:

It was obviously the 3 High C's that did it for Sam, who, I hear, hit them clearer that the Maestro ever did. *jaw drops in awe and wonder*

Sam was reportedly so jealous of Caitriona's Boogie Oogie Bugle Boy (2:20 mark) singing stint, he insisted on a go at it himself, and chose a light piece the fans could tap their toe too. He calls it a Scottish ditty. We aren't sure why.

Sam recovered and we all look forward to the episode, now tilted "The Scottish Tenor".

3) BILL SHATNER CRASHED THE SHOW: MADE HIMSELF JAMIE'S SON 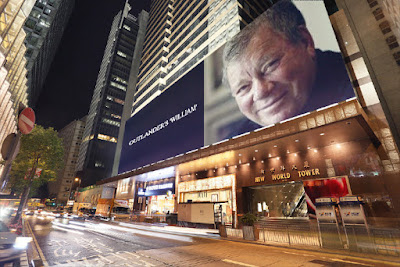 Touting himself as 'Outlander's William', Bill Shanter tried to get on the show by making himself William...Jamie's son. Quoted as saying 'Only a true William can PLAY a William. Age is all in the magic of acting...not a problem. I can do 17...hey, let go of my arm...put that taser down!"

Shatner and Sam Heughan are reportedly friendly...on Twitter...but the friendship was stretched to a thin wire after Sam saw this billboard near his condo in New York.

It was he who called authorities.

4)  CAITRIONA IS A NARCOLEPTIC

In a picture leaked by concerned cast mates, we have learned that Cait's narcolepsy has increased to the point where she can only act for 2 hours a day. This delayed production. 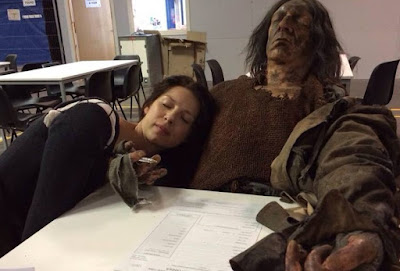 More pictures of proof have flowed into my office, but I don't feel comfortable showing you them as Cait usually sleeps in the nude. However, I do have shots of her pets: 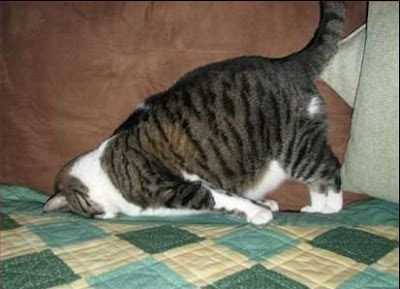 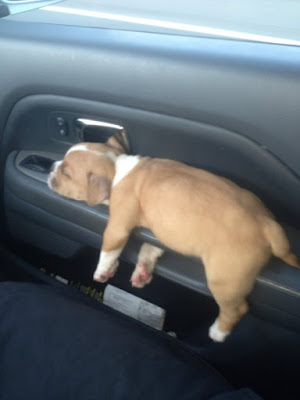 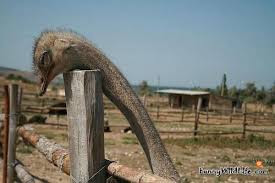 While on hiatus, Sam and some old school buddies got drunk, got matching tattoos (cant say where *snicker*) and all three of them had their heads shaved by a 4th buddy. Here is the picture Sam took of his mates after the deed was done:

...and here is Sam with the Starz make-up team's attempt to glue some fake hair down as a base for a red wig...arrows point to Special Glue Pins: 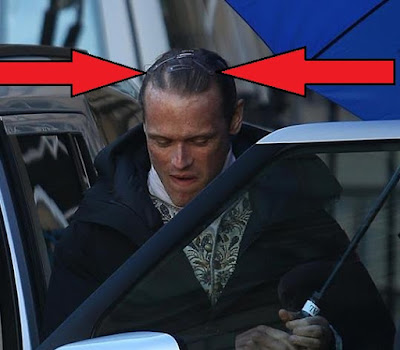 Note the orange/brown 'tan' Sam got from passing out under a heat lamp at Giuseppe's Diner. They will have to write that into the script.

There are few available details to this story but suffice it to say there were 4 mitigating factors:
1) Stress
2) Tequila
3) A trip to Brazil
4) Did I mention Tequila?

Diana WAS finally found having a hell of a time (see picture below) and her husband and Herself came back to Scotland a little more relaxed and a lot more flexible. 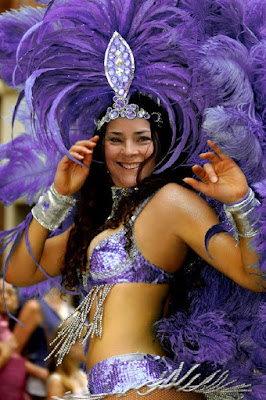 They couldn't keep enough of it on set. 2 bags a week was a slow week for Cait...and the show came to a FULL stop if she ran out. 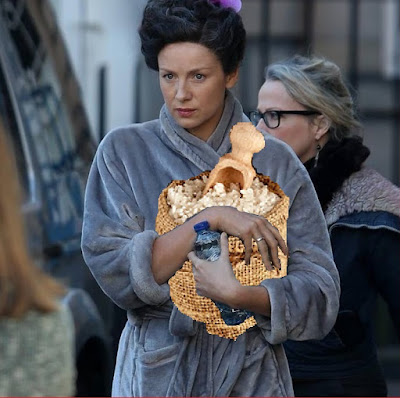 Here we see Cait during a break...white fudge in hand. Notice the scoop... and the almost mad protective look of defiance in her focused stare, challenging anyone to get between her and her stash. And yes...her dress at the '69th Annual Cannes Film Festival' was indeed made up of White Fudge Wrappers. NOT a surprise once you know her weakness.

8) TOBIAS SINGLE-HANDEDLY INCAPACITATED EVERY FEMALE ON THE SET 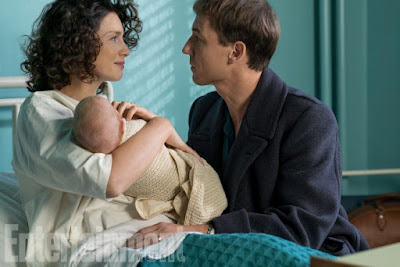 Unaware of the power Tobias Menzies has over women, Ron Moore innocently wrote a touching scene (shown above) where Claire gives birth to Brianna and a besotted Frank becomes a twitterpated mass of smittenhood and his utter and completely believable performance caused women to either spontaneously orgasm or lactate. One woman soaked her entire sweater and hadn't even had children yet. One was a virgin...but wasn't sure anymore. And another was so completely sexually satisfied every day that her husband came down to the set with a shotgun demanding to see 'that Frank dude' so he could make sure his wife was telling the truth that they'd never even touched! After several days worth of takes with little change, the set was ultimately closed to just the actors and 1 male cameraman who was immune to Tobias's charms (although he did admit to a half-woody and few tears).

The delay here is that Ron and co. must re-write the script to ensure Tobias doesn't cause such havoc again. It is taking longer than expected.
**

You may take this article as gospel, or you can SING gospel...but only one will show the world how well-adjusted you are.
*grin*