OUTLANDER: THE REAL REASON #SHARKLANDER IS GOING TO HAPPEN 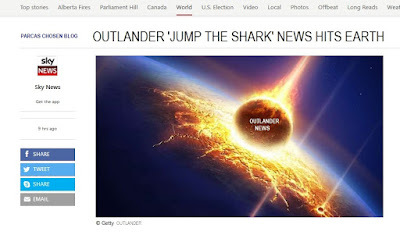 Diana Gabaldon’s casual pseudo-announcement of the earth-shattering changes to her books’ adaptations on Starz has caused a ripple in the Cosmos unrivaled in recent literary/cable television history. A ripple so widely felt and feared that The F̶a̶n̶d̶u̶m̶b̶  Fandom has battened down the hatches and cleared the decks (read: stocked up on wine, tissues and chocolate).

Their world was rocked. And not in the good way.


To be exact, Diana (the author of the phenomenal books of the Outlander Series *for those who stumbled on to this post in foggy haze of soon-to-be-legal marijuana looking for pictures of sharks {sorry to disappoint}) made a comment on an online forum she frequents called Compuserve and mentioned, in passing, that there would be some upcoming changes and may, or may not have, used the Happy Days Term 'Jump The Shark'. The media got hold of it and well...let's just say I am not the only person with an over-active hyperbole gene: 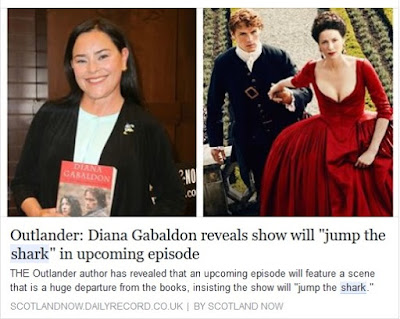 I am not privy to the exact wording of the online comment but after searching online for approximately 4 seconds, I decided that she said something like this: “In upcoming episodes, Starz is making Jamie blonde with a fake beauty mark that travels around his face from scene to scene. It will fun to guess where it turns up next, and it’ll help the ratings…”

This of course, caused a meltdown of epic proportions, because we ALL know wandering beauty marks is hardly original (ever watch Men in Tights?) and ‘changes’ really means: complete story-line destruction and sniper-like character annihilation! Sorta. Well, not really...whatever. Anyway...
*click to enlarge all pics

*is this the REAL meaning behind the dreaded 'mark me' term? *gag*

The 'announcement' *cough cough* had fans running at breakneck speed to their Photoshop apps: 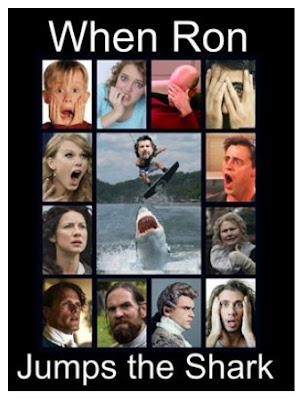 meme courtesy of Melissa Wagner
Doctor Gabaldon was quick to try and calm our Collective Fear (the name of a new punk rock band in England, by the way, made up four Outlander fans who stopped watching the show after Claire sang 'Boogie Oogie Bugle Boy') and posted this recantation within hours of the explosion of #Sharklander:*sorry if it blurry...I think she was crying when she wrote it 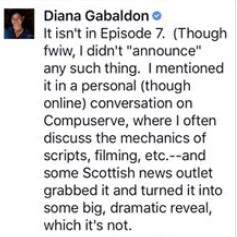 After another 4 seconds of intense research, I uncovered the bitter truth of what is REALLY going to change in an upcoming episode (probably 7, as the theme song for that episode is the theme music to JAWS)…. and it isn’t anything 'Jamie':

The shark jump is…FRANK TRAVELS THROUGH TIME TO RESCUE AND FIGHT FOR CLAIRE!

Tobias Menzies’ portrayal of Frank Randall (boring and rather inattentive in the books, but on the show is The King of Husbands with a sensual voice that sounds like a heated Rémy Martin Black Pearl Louis XIII Cognac, if a Rémy Martin Black Pearl Louis XIII Cognac could talk) has catapulted him to the top of *MAW’s wet dreams worldwide. (*Middle Aged Women). He has become such a hot commodity that Starz producers decided to re-write the books to allow Frank to Time Travel through the Stones at Craigh Na Dun.

A brilliant academic and a Professor of History, Frank discovers what really happened to Claire and understands the dangers she must be facing. He goes flippyapeshit with his need to rescue her and finally uncovers an ancient hidden recipe for passing through Time, found in an old battered cookbook of Mrs. Graham (it was penciled in right under Wee Scotch Pies...so yummy...) and finds a way to get to Claire in the 1700's: "Crushed diamonds or rubies, ingested with 2 cloves of garlic, half a cup of raw haggis and 8 cans of Fresca on Halloween night between 6:45 p.m. and 7:08 p.m; this will allow Men-Only to pass through the Stones to another era but, and this is crucial, they must be wearing an apron and curlers in their hair and have their penises tucked well out of sight in a sock puppet of Lambchop." *note: the addition of Fresca to the script was controversial as it isn't really known if it is really that ancient... 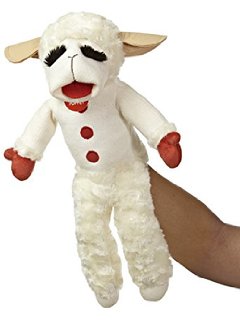 I am not sure why Lambchop was used in the story but I have already purchased stocks on the company that makes them, so I don't really care.

Not much else is revealed in this surprising stray from the book except to say that Frank will eventually be sent back to 1945 by Geillis under a Forget All This Shit Spell and will have been gone only 6 days, which nobody notices except Rev Wakefield who assumes Frank is either working undercover for the still-functioning but Top Secret MI6 Spy Agency, or drinking himself silly in a string of bars. He is baffled however, when he finds Frank semi-conscious in the back alley of The Pubic Penguin Pub, wearing only a potato sack apron, 2 rudimentary hair rollers and a sock puppet made of lambswool over his penis.

***JUICY TIDBIT!!
The meeting of Black Jack Randall and Frank, his 20th Century kith & kin, is a real mind-blowing heart-stopper... 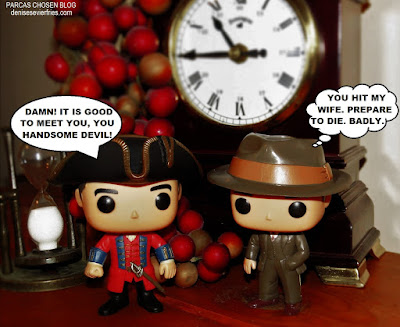 *My apologies to anyone who believes any of the above and suffered any form of distress. Let me buy you a drink sometime...perhaps after you are released from that place in One Flew Over The Cuckoos Nest.
Posted by DeniseSF at 5/18/2016 01:12:00 AM 12 comments: