Starz Outlander has a defector.
And he’s a talkin’.


These 10 leaked photos will have the Outlander Fandom shell shocked and shittin' sandbags. Hard to believe but...

1) DAVID BERRY WILL BE BLONDE LIKE ‘BOOK’ LORD JOHN GREY, BUT HERE IS HOW THEY DECIDED ON HIS 'LOOK'! 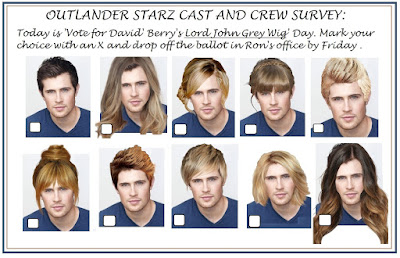 I don’t think everyone took the vote seriously (see discarded ballot below), which is disturbing to many fans because now they know why we didn’t get a yellow eyed Claire… 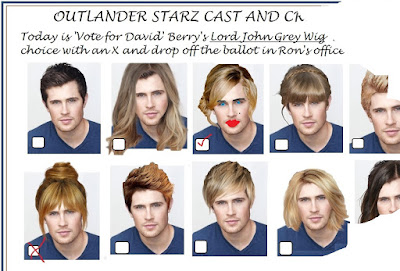 2) THE AUDITION CALL FOR A VIRGIN TO PLAY THE PART OF THE CONNIVING GENEVA DUNSANY CAUSED RIOTS.
News of the audition went viral on social media and all Hell broke loose last week as hundreds of 'virgins', aged 18 to 96, clogged the streets and subways on the path to Starz headquarters. There were road blockages, taxi hijackings, and stores in a 200 mile radius sold out of 'Young Vixen' Halloween costumes, blonde hair dye, Sweet16 Rouge By Revlon, Oxytokin wrinkle cream, girdles and Slim Fast.
And Multi-gyn Vaginal Douche Combipacks

Starz has stated that their auditions for Jamie Fraser's Cave Sex partner will be kept MUCH more secret. 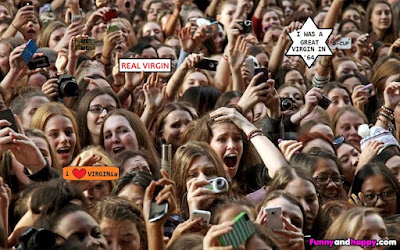 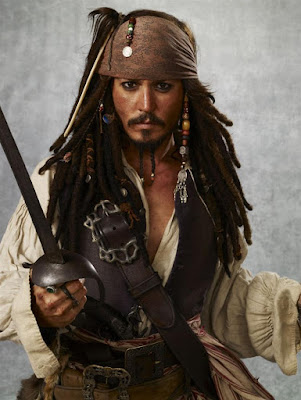 After years of negotiations, the plum role of the dashing but deadly pirate, Stephen Bonnet, will be played by Oscar winning actor, Johnny Depp who will revise his role as Captain Jack Sparrow...but be called Captain Stephen Bonnet. It is rumoured that the bizarre bonus demands extracted by the Hollywood mega-star were so crazy that...JUST WAIT...THIS JUST IN! JOHNNY DEPP IS OUT! His 2 dogs, Kah & Ching, caught cold and he has chosen to break the contract with Starz and fly them to Australia for proper care.

There is no word who will fill his shoes, but there are whispers that Westley from The Princess Bride may be willing to give it a go. For a quarter the price. 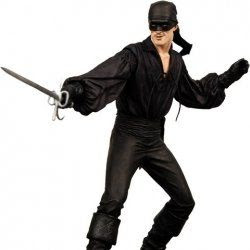 4) ONE OF THE DIVA BONUSES FROM DEPP'S NOW DEFUNCT CONTRACT WILL BE USED FOR BONNIE PRINCE CHARLIE'S HIDDEN TREASURE.

The life-size solid gold statue of Captain Jack Sparrow that Johnny Depp had asked for will get some use after all. However, because the cost of re-smelting the gold to make bricks to hide in Jocasta's Plantation as per the books, the statue will remain intact and simply stand in the foyer as a hat rack. As a person who appreciates a good hat (read: Frank's Fedora) I, personally, am good with this decision. 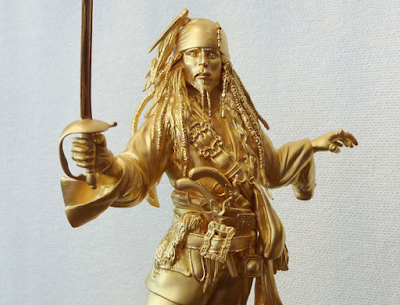 5) THERE BE VOODOO AND MAGIC RITUALS AFOOT...BUT THE RESEARCH HAS BEEN...UMMM....UNCONVENTIONAL.

There is a plethora of literature and knowledge out there to help bring Diana Gabaldon's voodoo and magic based plot lines to life in a realistic and believable manor, however, Starz has seen fit to use this as their primary example to guide their decisions:


6)  JAMIE AND LAOGHAIRE (OR 'LEGHAIR' TO MANY OF US) ARE MARRIED AND ENJOY NIGHTLY SEX.

The story demands that Jamie and Leghair marry, but it was deemed unrealistic that such a virile studMcMuffin like Jamie would only settle for monthly nookie, so it was decided that they would have nightly marital romps, but only like Jamie always believed it should be for the 23 years before he met Claire: horsey style. That way, Jamie could still be 'active', but not have to actually see Leghair's face. Starz hopes this appeases the volatile fandom who could burst, literally, into flames at the mere mention of Ms. Leg O'Hair's name. 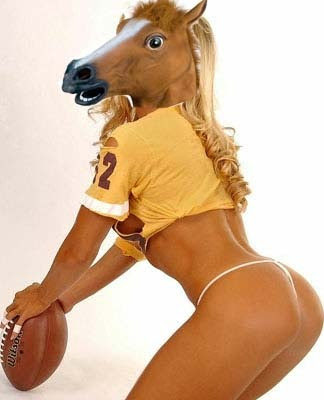 7) FRANK IS SEEN IN EVERY OTHER SCENE!

Claire cannot figure out what secrets Frank is keeping and although the signs all point to a cheating husband who helps his students with more than their homework after school...but she is clever and senses there is something not quite right with it all. The season is knee deep in Red Herrings and Frank just may be the Tragic Hero of the entire story, loving Claire unconditionally and raising Bree to be strong and brave. I hear we see Frank in myriad flashbacks and hear his Panty Loosening Baritone often...but then again, I may have dreamed that part.... #OrgasmicMI6 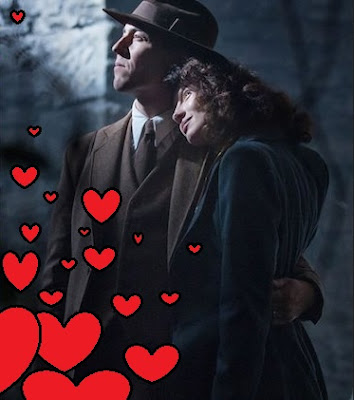 8) THE LORD JOHN GREY STORYLINE HAS A SPIN-OFF BOOK SERIES, SO WE ARE GOING TO SEE A SPIN-OFF TV VERSION AS WELL.

But it's a strange adaptation that sees LJG go THROUGH the Stones (SHOCKER!)  and enjoy a career as a fitness guru named 'Richard'. This satisfied the brewing jealousy between Sam Heughan and David Berry, which stemmed from David not having his own 'Peek Challenge'. Now he does...kinda. And here is a sneakier peeker:

*I think the Lead Stone Dancer, Mrs. Graham, went with him too! In the purple?

9) SAM HAD TO LEARN TO PLAY THE HARMONICA. 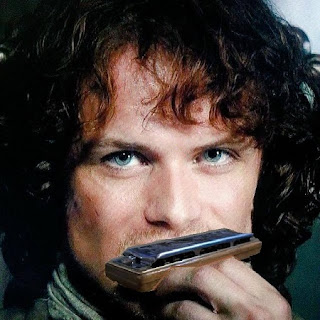 Caitriona had her musical interlude with 'Boogie Woogie Bugle Boy', and Sam, never one to be one-upped, insisted on having his time in the musical spotlight too...so he learned to play the harmonica, which he uses to play a 12 minute solo while doing his hard time in Ardsmuir Prison. #HeartbreakMcHotel

*TIP: This may be a good time, during the show, to have ones' bathroom break and grab some snacks.

10) THIS PRESS RELEASE SPEAKS FOR ITSELF. 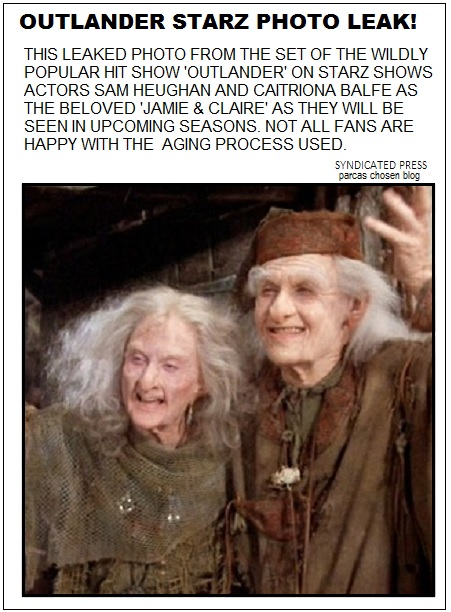