I’ve just had an epiphany. A retro-revelation, as it were.

An unexpected foray onto Youtube left me seriously starting to reflect upon what invisible hands shaped the lump of me that became me.

If I were to get one of those social media, wanna-get-to-know-you-better questionnaires that say ‘TELL ME 5  FACTS ABOUT YOURSELF’, I would write:

1)      I am a huge Harry Potter fan, largely in part because of the Camelot-ish atmosphere and castles: the giant Hagrid is a clear favorite character of mine (and second only to Snape, who I would have sex with on my mothers dining room table during Thanksgiving supper if he asked).
2)      I collect roosters, but call then chickens. (Sounds funnier).
3)      I love miniatures.
4)      I enjoy classical music and medieval type folk songs (e.g. Loreena McKennitt)
5)      I am a romantic and was a far-too-clingy girlfriend in my day…but I was usually the ‘dumper’ and rarely the ‘dumpee’.

This random list is ‘me’... unexplored; constant. But fast forward to 10 minutes ago when, suffering yet another 3:00 a.m. bout of sleeplessness, I spontaneously decided to go on YouTube and seek out some old videos of childhood shows. Perhaps I could drift back into my childhood and remember how it felt as a kid to"Go to bed!" and actually sleep!
Living in a small town in Southern Manitoba, we had only two TV channels. Damn lucky to even have a TV! My strongest memories were of Hockey Night in Canada, newsman Linus Westberg from Yorkton, The Beverley Hillbilies, Ed Sullivan with Topo Gigo, Get Smart and Mr. Dressup.
I adored Casey and Finnigan in Mr. Dressup.That Tickle Trunk was a right proper miracle! I quickly found an old clip.

But instead of clicking on it, I noticed another video of an old children’s show that I grew up with…a show I hadn’t thought of in over 40 years but had watched daily in my formative years in the 60's: The Friendly Giant. I loved that show and its theme song was the first music I remember…and the first song I learned the lyrics to. For those of you who don’t know the show, here is a quick preview of how many of us Canadian Baby Boomers spent our extremely limited TV watching hours: *watch closely, there will be a pseudo-quiz afterwards…

Did you notice the following?
1)      A castle. Medieval, complete with moat and drawbridge.
2)      A giant who is gentle and loves animals.
3)      A rooster named ‘Rusty’.
4)      A miniature cozy living room with miniature everything in it.
5)      The opening and closing theme music is classical/folk mix with a decidedly haunting melody. This theme song is oft times called ‘Early One Morning’ but is actually titled "The Forsaken Lover". The lyrics begin… 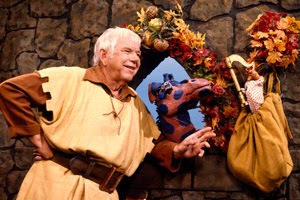 Are we seeing a pattern here? I sure did. The second I heard that tune playing and saw the castle drawbridge open, it was like my entire world made more sense. So THAT is where I formed this love of such odd things! It brought me to tears. Not the ear-shattering, heart-rending cry and complete agony one felt when Donny Osmond got married, but the light eye-dampening of yesteryear reminiscences. A wistful whimper.

And WOW!, the 'love'm and leave'm before they leave you' routine I subconsciously followed during my dating years seems like it was taken from the chorus of 'The Forsaken Lover'. What would Freud say about all this?

1)      Thank God we only had 2 channels and the only other show I now remembered watching faithfully was The Bugs Bunny Show, which explains my fondness for black and white, Sylvester-like cats (a pic I took of our little Jasmine is below): 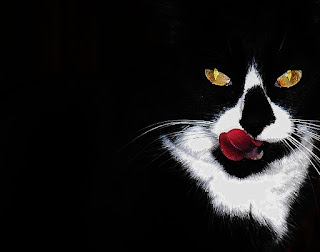 And it also explains my partiality to full-head-of-hair-challenged men like Elmer Fudd (you’d have to meet my hubby to see what I mean). My embarrasing rooster fascination, personified in the infamous Foghorn Leghorn, now made perfect sense as well!
Most surprisingly, my first taste of opera was slipped into my psyche with the following Bugs Bunny episode. Opera truly changed my life forever, as I met my husband whilst singing chorus with him for 13 years in an opera company in BC.

Watching this as a child, how was I to know my heart had just been prepped for my future happiness?

2)      My kids and their buddies grew up watching Teenage Mutant Ninja Turtles, Dragonball Z, Transformer: Beast Wars and Pokemon. All aggressive, violently competative (in a Good vs Evil kinda way), winner-takes-all kids' shows that all had tiny slivers of high-morality embedded here and there between blood-spitting, head-exploding, torture-glorifying, save-the-world fights.

Conclusion? Our childhood shows molded us FAR more than we ever knew! It's a jarring reality.
Conclusion of the Conclusion? Honey, we are in grave danger.
The upcoming generation is a highly desensitized army of warped war-mongers who have no problem with talking turtles; stealing spaceships that look like Hoover vacuums on steroids; brutal military tactics; misogynistic, sexless aliens that give birth by barfing up their eggs, and emotionless androids that can shoot fireballs from their hands and randomly chop up bodies and/or explode planets.
And they are locked and loaded, ready to rumble. I should know. Apparently I helped warp them.
**
_______________________________________________________________________
AFTERTHOUGHT: The novel I recently wrote is called Parca’s Forsaken (click for link). Remember the name of The Friendly Giant's theme song? ‘The Forsaken Lover’. How’s that for an eerie coincidence. Or a sign?


ROGER EBERT RE-POSTED THIS BLOG ON HIS OWN FB PAGE! MANY MOONS AGO BUT STILL A THRILL. 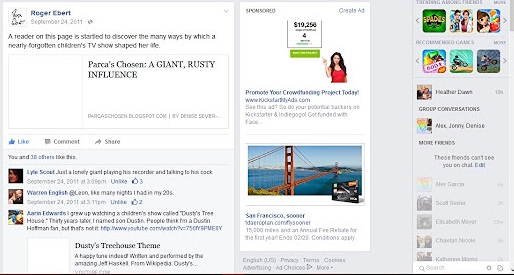