Newspaper Virgin: How I Kept My Hyphen Intact

My last AUTHOR MINGLE article was all about faces and the ones we offer the public via our work (profile pics, avatars, dust jacket portraits, etc…). I crooned about how I would only use my most flattering images regardless of how illogically youthful or outdated they were. My image was mine own!

Little did I know that I would soon be scrounging through every drawer in the house looking for an ‘original’ picture of myself for my first newspaper interview.

The irony was so thick I could almost taste metal. None of my good old standby photos (read: de-wrinkled) of myself would suffice because they were scanned. The paper needed an original file for optimum clarity in their article. I was trapped.

But that happened after the interview. The beginning was far worse. Or should I say, the pre-beginning was worse. The reporter was to call at 1:00 p.m. my time and by 12:30, I was pacing up and down the room in front of the phone, wondering what questions were going to be asked and what the hell the names of my main characters were.  I had written and self-pubbed three books. Why the hell did I have to write three? What were they about again? My mind was beyond blank and verging on implosion.

Thus begun my virginal foray into the world of newspaper interviews.

The phone interview with a reporter from my hometown newspaper turned out to be a valuable exercise in self-awareness: I was aware of my much-too-loud laugh, my raspy voice that sounded like I was born smoking a cigar, my inability to string four words together without adding the ever-so-eloquent ‘ummm’ and my propensity to think faster than my lips would move. Oh, and I became keenly aware that when being recorded on tape, I get the inexplicable urge to belt out a Tarzan/Carole Burnett-like jungle call and/or giggle uncontrollably like Betty Boop on laughing gas.

The clock proved that the interview took 20 minutes, but it felt like 2. What had I said? Did I just ruin my career and put a giant cork in my bottle of opportunity? I vaguely remember saying the words Hitler, mother and church. Did that mean I said my mother met Hitler at church?

I moaned my way to the bathroom and sat on the edge of the tub with my head in my hands, trying to decide if I should drown myself in it, but I knew there was a part of me that still yearned to see, at least once, an article in the newspaper about my books. Even if I couldn’t recall their titles. *I think I said one was called Twilight and another one Harry Potter something-or-other…

I then recalled every important detail I forgot to mention and turned on the water.

In the end though, I didn’t do a swan-dive with a half twist into my bathtub and I didn’t actually embarrass myself too badly in the article. I took five million selfies and tried not to look like my great-grandfather after one-too-many potato-distilled vodkas, and my sister Rhonda helped choose the least ridiculous of the lot and I sent it in, hoping it would be stamp-sized and airbrushed.

It was neither. The photo took up 2/3 of the page and my black Leno streak in my silver hair looked like I was wearing Pepe Le Pew on my head. But it was done. I had survived and apparently, I was still a ‘Sevier-Fries’.

So, despite being scared and nervous, my first time wasn’t as painful as I feared, my hyphen remained intact and I could still claim my name as untouched.

What more could a girl ask for?

**Here is the article, although you may have to subscribe to The Dauphin Herald to view the following link…sorry! 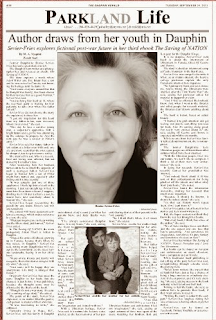 Link to the most charming lil' newspaper in Manitoba: Dauphin Herald article