Well, you don't have to be Freud, Dr. Ruth, Dr. Phil or a hooker to know a Sex Act when it whips you in the face...or in this case, the back. Not uncontrolled anger, mommy issues, insanity or a need to buff up his tennis arm…this whipping post scene with Black Jack is a case of pure sadomasochism (definition:  the deriving of pleasure, especially sexual gratification, from inflicting or submitting to physical or emotional abuse; all of which describes my first piano teacher).

BJ (appropo initials, yes?) Randall relives his intercourse/whipping fantasy (made real at the expense of the heroic and selfless Jamie) by detailing it to Claire in ever-so provocative and sensual terms, and becomes so engrossed in his memory, that if it weren’t for the vigilant TV Censor Gods, there might have been an ‘Ooops! Pardon me Madame whilst I change my breeches...” moment when he c̶l̶i̶m̶a̶x̶e̶d̶  finished talking.
*Talk about your Emmy worthy performances! Both Tobias and Cait deserve major kudos for their work: BJR fairly reeked of Sex Juice and Claire’s ugly choking-for-air face proved her acting steaks (I hate chops, sorry). Was I the only one who pretended to be punched in the stomach afterward to see if I could look and sound as believable? My poor DH thought I was having a seizure…and kept reading his paper. *sigh* No Jamie in MY living room, obviously. (He also jumped up after the flogging scene and said, "That reminds me! I didn't take the hamburger out to thaw for supper!" and ran to the kitchen. *double sigh* He was a chef in another life so I keep him around...)

I paraphrase, but the whole ‘connecting’ with Jamie through the whip (surrogate penis); feeling the shudder of the impact up his arm and exploding (ejaculating) into his heart (surrogate vagina) and the thought that he and Jamie ‘created something beautiful together’ (surrogate pregnancy and birth complete with blood splashing on the floor and torn flesh) made me so uncomfortable that I tried to look away, but like a mesmerizing crash scene on the highway, I had to stare and felt guilty for doing so. But not guilty enough, apparently, to not think of a meme to commemorate the event: 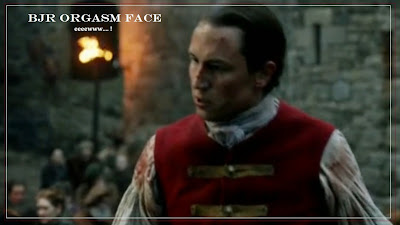 If Jamie was Christ-like, hanging on a wooden post and flogged for the sins of others, then BJR is truly a perfect Devil to counter that Saintliness. The very name Captain Jack Randall has 18 letters. The Devil’s own number, 666, adds up to, yes…you got it…18 letters. *whistles while you go to count the letters* This may seem a manipulative exercise but at my age, any exercise is a plus.

I haven’t written an OP (opinion piece) for any of the episodes or scenes until now, because I didn’t feel any emotions strong enough to put quill to paper. The feeling today though, could not be satiated with a meme-fest alone: 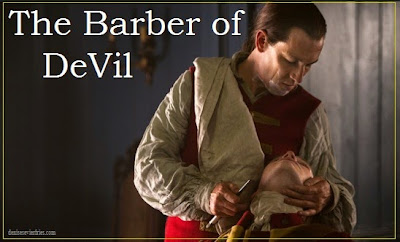 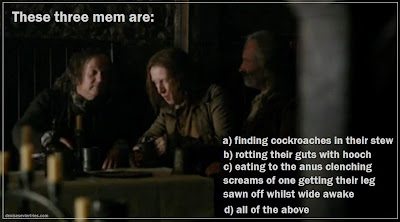 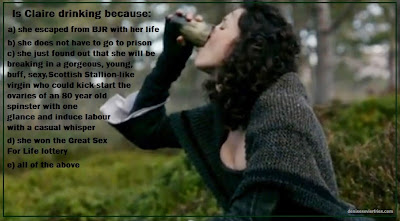 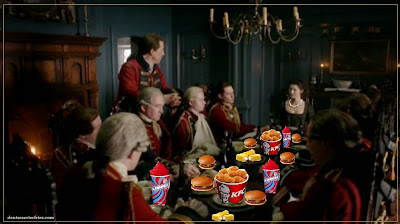 Episode 6 was special. *and I think #7 will be even more so… 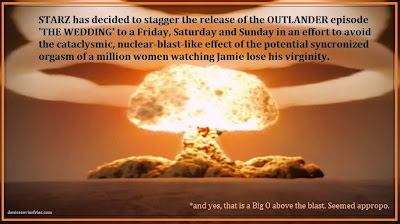 In all, Starz is the Master Chef who takes Diana’s book and expertly trims the juicy fat, slices and dices here and there (with the odd wee garnish added) and cooks up a dish that may be a little bloody, but it is rich and man, does it hit the spot! (G-spots included *wink*)

That is my second food reference so I am obviously getting hungry, so I will leave you with one last meme-morsel to chew on before I take my leave *tummy growls*: 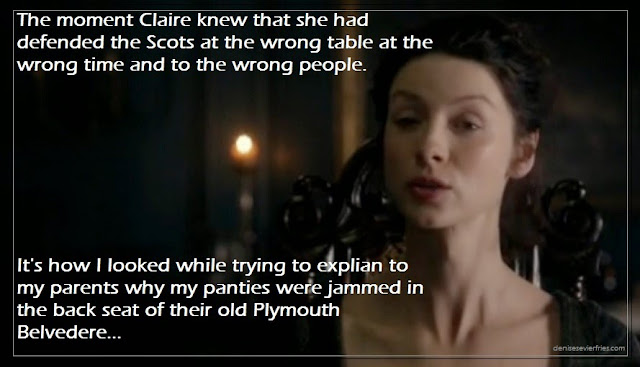