We don’t have TV.

We have TV’s...but we don’t watch TV. Subtle but important difference. We got rid of all cable, satellite and local television 2 years ago in an attempt to see if we could survive without them.

Commercial infested television that grates your teeth after replaying the same LSD-inspired commercial ten times in an hour, and paying for 300 channels we didn’t want, need or use, finally drove us over the edge and we decided to experiment with quitting TV cold turkey.

Between our 700+ books and 1500+ movies, we are not want for entertainment, but I still need a daily fix of CNN News, CBC News and The Daily Show, with a smattering of Hot in Cleveland. This, and a lot more, I easily find on-line. All COMMERCIAL FREE!

Another bonus to keeping in touch with the world on my computer is that I save a ton of cash denying Shaw and Bell from entering our living room. And I get a hell of a lot more info reading my ‘web-newspaper’ with my morning coffee than I ever did watching long, drawn out broadcasts on television. At the click of a key, I get a wide variety of news from around the world with my Froot Loops, customized to my interests. (Peter gets his news from Germany with his Schnitzel und Bratwurst)

One channel cannot possibly cover the diverse news coverage I get in one morning, and never as fast. For example, here is one morning of REAL headlines (honest!)... and believe me, Froot Loops was a most appropriate cereal that day:

Man has ‘mini’ tattooed on penis to win car
Andreas Muller, 39, decided to have the rather painful tattoo applied after a radio station ran a competition to win a £20,000 Mini Cooper. Radio listeners were then treated to Muller’s cries of agony while the unique piece of branding was created. 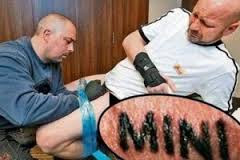 Woman rescues husband in tiger attack
A villager in Malaysia has his wife to thank after she charged a tiger that had pounced on him in the forest. Han Besou, 55, who was several feet away, heard the screams of her husband and charged the tiger with a large soup spoon, bopping it on the head, a local paper reported. The animal fled.

German man calls fire brigade to rescue beer he left on train
A 44-year-old man smashed the emergency glass on a fire alarm at Kaiserslautern train station when after stepping off, he realized his beloved beer was still on-board and leaving without him. As well as the shame of realizing his stupidity, the unnamed man was also left with an injured hand where he smashed the glass.

Ingesting Poo Be Good for You?
Recently, the Journal of Clinical Gastroenterology published research suggesting that, in certain cases, patients suffering from the nasty ‘clostridium difficile’ bug may need fecal transplants or "transpoosions." Although antibiotics are now the first mode of attack, a growing number of doctors believe that, in some cases, injecting excrement either by enema or through a gastric tube inserted in the nose is more effective.

Witches to face prison for false predictions
Romanian witches and fortunetellers are cursing a new bill that threatens fines or even prison time if their predictions don't come true. Superstition is a serious matter in the land of Dracula, and officials have turned to witches to help the recession-hit country collect more money and crack down on tax evasion. Witches argue they shouldn't be blamed for the failure of their tools.

Russia's parasailing donkey dies
Anapka, the Russian donkey whose brays of terror while parasailing won her worldwide sympathy has died. She had been sent up into the sky over a southern Russian beach in a promotional stunt, and the YouTube video of her trip made headlines around the world.

Notorious 84-year-old Hungarian cat burglar 'Flying Gizi' caught again by police
The 84-year-old woman, known as "Flying Gizi," whose criminal record goes back to the 1950s, is again in custody for suspected theft, police said Tuesday. Gizella Bodnar, who has been convicted of over 20 crimes and has spent nearly 18 years in prison, got her nickname because she enjoyed taking domestic commercial flights after successful break-ins. She also published an autobiography in 2007 claiming that she became a kleptomaniac as the result of a youthful bout with meningitis.

Confession app blessed by Catholic bishop
An iPhone and iPad app that helps Roman Catholics seek forgiveness for their sins has been sanctioned by the Catholic Church. The app walks people through confession step by step and it reminds us when their last confessions were and keeps track of sins they have previously confessed. However, absolution or release from the sin can still only come from a priest.

Granny Fights Off 6 Robbers With Her Purse
Ann Timson, a 75-year-old woman, armed with only her handbag, ran across the street to attempt stopping a daylight robbery. Six robbers, armed with sledgehammers, were smashing a jewelry store window in Northampton, England when Ann started hitting them with her purse, breaking up the robbery and making them run away without any jewels. Only after they were running away, did bystanders come to help.
So you see, in one day, I garnered a wealth of knowledge that can only aid me in living a richer, better life. I learned...

1) The next time somebody tells you to “Go eat a shit sandwich!” they may only be concerned for your health.

2) Meningitis can fry the section of ones brain that holds ones moral values, and old women can grow balls that clang.

3) Your private, innermost personal gut-wrenching sins that are a soul-searching plea to God and His Eternal Mercy, can now be hacked.

4) Donkeys can fly, but shouldn’t. And advertisers can be real asses.

6)  Instead of burning them at the stake, witches can now be sued. (Voodoo dolls with suits and briefcases are flying off the Wal-Mart shelves in Romania as are pins, needles and matchsticks.)

7)  Anyone tattooing the word mini on their penis must be either very secure in their masculinity or hung like a horse.

8) All one really needs while on safari is a large soup spoon for wild carnivores and perhaps a feather-duster for rampaging elephants.

But there was one main lesson I learned that day:  Flying Gizi got published; now I know what to do.

I can hardly wait till tomorrow...