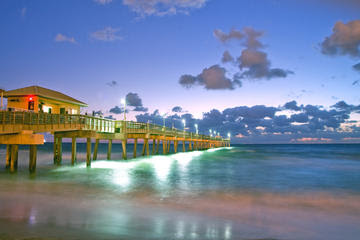 Jamaica is a lovely island get-a-way. For anyone but me.

In 1983, when I married my second husband Mark (second in my trilogy!), we flew to Jamaica for our honeymoon. Our ‘Just Married’ matching T-shirts scored us a bump up to First Class and it was bubbly champagne, bonbons and legroom all the way to the land of Reggae and Rastafarians.

Within ten minutes of arriving, we were offered some local ganja (a.k.a: marijuana/dope/weed/wacky-tabacky):

Luggage Boy: (toothy grin at Mark) Hey mon...your bag says you be a doctor. I am a doctor too. I can make you feel real good, mon.

Denise: No thanks. We’re married now. We aren’t supposed to feel good.

If you would have seen me poolside the next day, you might have thought I was a mighty poor excuse for a thief, blatantly hording my stash out in the open: mounds of cigarettes in small bundles, neat piles of matches, a stack of monogrammed hotel napkins and an impressive array of empty glasses and beer bottles. This was an all-inclusive, all-you-can-eat/drink/smoke resort and I wasn’t going to diet or cut down on a single vise for the week I were there. This small-town prairie girl was taking no chances and I stockpiled as much as I could just in case they changed their hotel policy midweek. Sure I got a few odd looks, but I felt invisible. Nobody knew my name, shoe size or was even remotely related to me. It was unlike anywhere I ever had been before...it was an emancipation!

Late in the afternoon I waved off the chance to water-ski in the warm Caribbean Sea (I adhere to the belief that playing in areas where wildlife can swallow you whole should be avoided) so I was left to my own devises and chose to read on the beach. The sun was brutal and the ocean immediately in front of the hotel was protected by a high-tech safety net, so feeling uncommonly adventurous (and admittedly a bit wimpy for not skiing) I decided to go snorkeling.

The fact that I couldn’t swim nor had I ever snorkeled, failed to register in my mind. The self-preservation portion of my brain had been fully cooked in the blistering Jamaican sun and was set aside to simmer.

The resort lent out free gear and I taught myself the basics quickly, setting off along an exceptionally long pier jutting out into the crystal clear waters close to where I had been lounging on the beach. The panorama below me was entrancing: such an alien, delightful world! But soon I noticed, directly underneath me, a hard-plastic cup from the resort embedded in the ocean floor. Usually, this object wouldn’t cause a stir (save being a piece of unfortunate litter in such pristine surroundings) but it dawned on me that these over-sized tumblers were normally quite large in my hands, and this one was very tiny. Itsy bitsy, even. Two things were immediately obvious: I was way too far out and there was a lot of water between me and that cup! To give myself credit, I did not panic, but quickly snorkeled back to the beach. I had just turned to sit in waist-high water and was taking off my mask when I heard the first scream.

People were running down the pier and yelling, pointing to a massive ripple in the water, utter horror stamped on their scorched, lotion soaked faces. The sinister ripple was in the precise spot where I had seen the tumbler just seconds before.

I didn’t know then what had caused all the excitement, but I knew that I had just missed a personal introduction to it. An ice-cold sensation doused me from the top of my head fully down to my toes. That was how tangible the shock was. I wanted to scoot further back out of the water onto the dry, safe sand, but I was frozen solid. A shark could have slid past and looked me over like a pork roast at Safeway and I couldn’t have budged an inch.

After a few minutes, I finally made it shakily to my lounger and sat down. A staff server came to me and asked if I would like a drink or a snack.

Denise: Do you know what all the screaming was about by the pier?

Server: (naively honest) I heard a Moray eel broke through the netting, mon! A big one too! But no problem, mon...they don’t usually attack humans.

Denise: Where is our luggage boy?

I am nobody’s fool. I know bloody well that this particular giant eel had not accidentally passed through a breech in the netting but had sniffed a rare delicacy, a pure 100% fresh Ukrainian/Canadian hors d’oeuvre and it had chomped clean through that net looking for the buffet table.

I was the Truffle Of The Sea.

Now, how many people do you know can say that? 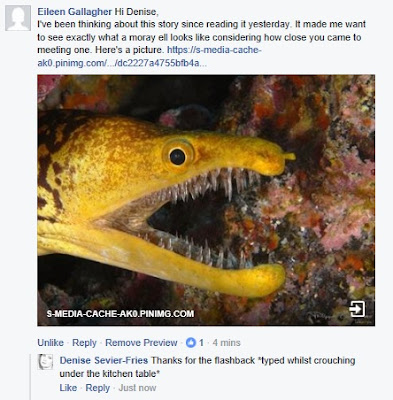 Posted by DeniseSF at 9:30 AM No comments: