I GOT GOT BAD

I made this meme today after finally recovering from the Red Wedding scene on Game of Thrones on HBO.

Only I don't watch HBO. I watched the episode on a free stream website online that I won't mention because, for all I know, it's illegal and in 5 minutes, a team of Men In Black will bust down my door and try to confiscate my laptop and erase what little is left of my memory.

So, what is it about GOT that distracts a 50+ year old woman with a hubby and 5 kids away from life on a regular basis, either on the screen or in the much-cherished 5 GRR Martin books?

The answer is: I don't bloody know.

But I find solace in knowing that the fascination with GOT is ageless and worldwide. My 20 something year old son got me into the series and after season 1, I bought all the books and devoured them. Then I bought the DVD's. Then I made this: 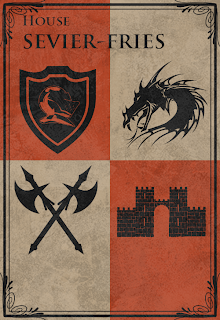 Is it simply my romanticized love of anything medieval? My obsession with anything Sean Bean? Perhaps. But whatever it is, I got it bad. And I'm not alone. And maybe that is the answer right there: not being alone. Being part of a community, a family of like-minded and passionate people is addicting. And just plain fun.

Obviously I already have a family; a REAL family, but seriously, although they are a pretty good bunch, they will never understand why I want to time-travel to Westeroos and

I don't blame my family for not understanding since I don't understand it myself, but for now, I will continue to be a fantasizing fan, a wannabe medieval castle-bound maiden (yes, I said maiden, so shut up) and random meme maker.

Oh...and I have one message to David Benioff and D. B. Weiss:

How many times can you kill Ned? First it was the horrific and utterly devastating killing of Ned himself...then his namesake unborn grandson, Ned the Baby, was stabbed to death in the womb. Who's next? Ned the Baker? Ned the Uncle's Brother's Friend's Janitor's First Cousin? Ned the Pet Hampster? It has to stop! My heart simply cannot stand another Ned murder.