I haven’t been spanked in over 50 years.

No…I am not looking for one now (not my cuppa tea) but bloody hell, there is a tsunami of virtual Outlander spankings going on these days online and I for one am thoroughly sick of them.


I will not link them here because all you have to do is swing a dead Adso around and you'll hit one.

Every time I turn around, some self-righteous twattle with her panties wedged up so high they look like a scarf, is telling other Outlander fans what to say and how to act, and calling them names like ‘the lowest common denominator’, ‘immature fools’, ‘indecent’, ‘tacky’ and a lot worse…like prim schoolmarms teaching elocution and Miss Manners classes. And all because a bunch of fans are having fun out there re-living their teenage years by crushing on Sam Heughan (the main male protagonist in the Starz production of Outlander, JUST in case you are reading this by mistake and thought it was an article on candy making or ophthalmology or something). 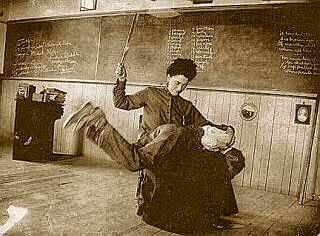 Blog Flogs are reaching an all-time high and now rank right up there with Body Shaming (apparently that includes saying that Claire’s boobs looked like squashed kumquats in her wedding dress. Which they did.) 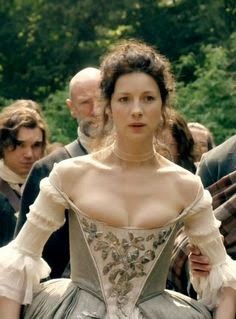 Yes…now we have Fan Shaming: making people feel like pond scum for being fangirl-silly about their celebrity crushes and talking in a naughty or sexy adult manner.


I confess. I am a wee bit naughty.

I like seeing pictures of sexy men sometimes and it gives these cold, old bones a bit of warmth as I limp through my Golden Years. Yes, my darling husband warms my bones too but I think he doesn’t mind a little help shoveling the coal in the furnace, so to speak.

I don’t go out of my way to find these pictures but as a member (and admin) of the largest Outlander group on FaceBook (OSFG: Outlander Series Facebook Group) I get more than my fair share to ogle. *notice Google’s subliminal suggestion to us all…GO OGLE! Yea…weird huh?…clever bastards.

The purpose of my writing this is to put something out there that needs to be said: LEAVE ME AND MY EYE CANDY SISTERS ALONE!

Yes…anyone who likes a few sweets now and then (especially the Scottish Butterscotch variety a.k.a.: Kilt Kandy) should be allowed to enjoy them without the finger-wagging, preachy, judgmental, self-appointed Morality Police telling them that they are pathetic, immature and mentally/sexually stunted, grey-haired sickos who should be ashamed of themselves.

I resent that. I prefer my hair to be called ‘silver’.

Every article that berates others (most single out women actually) are quick to say that they are ‘not prudes’. Ummm…yes you fucking are. In fact, you put the rude in prude as well.

So what is the main cause of all the hoopla? Well, Starz often releases pictures of its stars and some are kinda sexy. Some aren’t, but ‘sexy’ is very subjective and we all see things our own unique way, as can be seen by those who get Lady Boners from looking at Benedict Cumberbatch. Amazing actor, oh yes, but sexy…meh. Not a bash…I feel for those (like my youngest daughter) who adore his imperfectly perfect imperfections.

SMOS (Spontaneous Multiple Orgasm Syndrome) has risen 360% since Outlander has become a TV series, matched only by the spike seen in 1982 when Tom Selleck took off his shirt in an episode of Magnum P.I. and a well known side effect is loosened tongues and uninhibited FB commenting. Sam has amassed quite a following and is at the heart of the ‘problem’. Sam looks good in a kilt (*full disclosure: I am not a kilt lover but allow for individual tastes) and there are those who would see more of him in one and reflect upon its sub-bellybutton hidden treasures (read: jewels). I don’t see the thrill but do not condemn those who are feelin’ it.
*I did however make this meme once that makes my feelings clear: 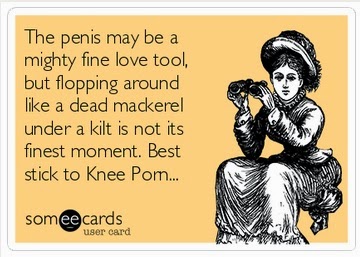 Pamela Anderson has been around forever for fans to fawn over and now womenfolk (and some menfolk with obvious good taste) have Sam. He is, to many, the ultimate sex symbol. *again, full disclosure: I am not really a Sam As Sex God follower…he is my son’s age and I am not a Cougar…more a well-fed Tabby Cat that’s been de-clawed…so I am not writing this as a Super Fan who knows no boundaries. *Get me near Sean Bean though and well…I will show you what Indecent Immaturity is all about.)

Two pictures of Sam in particular have caused fans worldwide to step up their wolf whistles and online drooling (the second of which I made into a meme; seen below it): 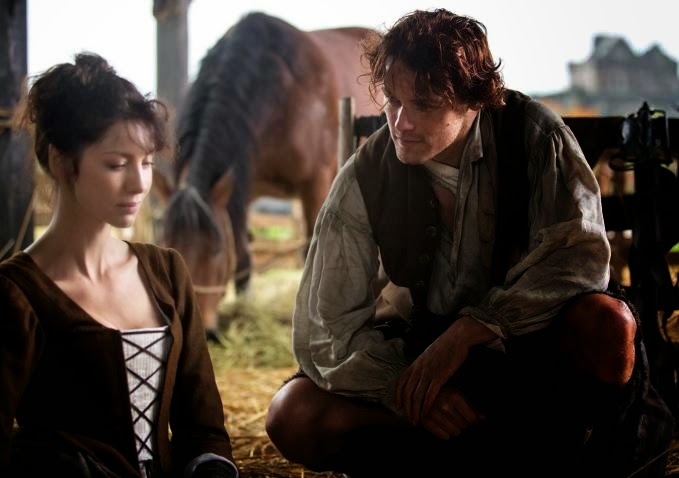 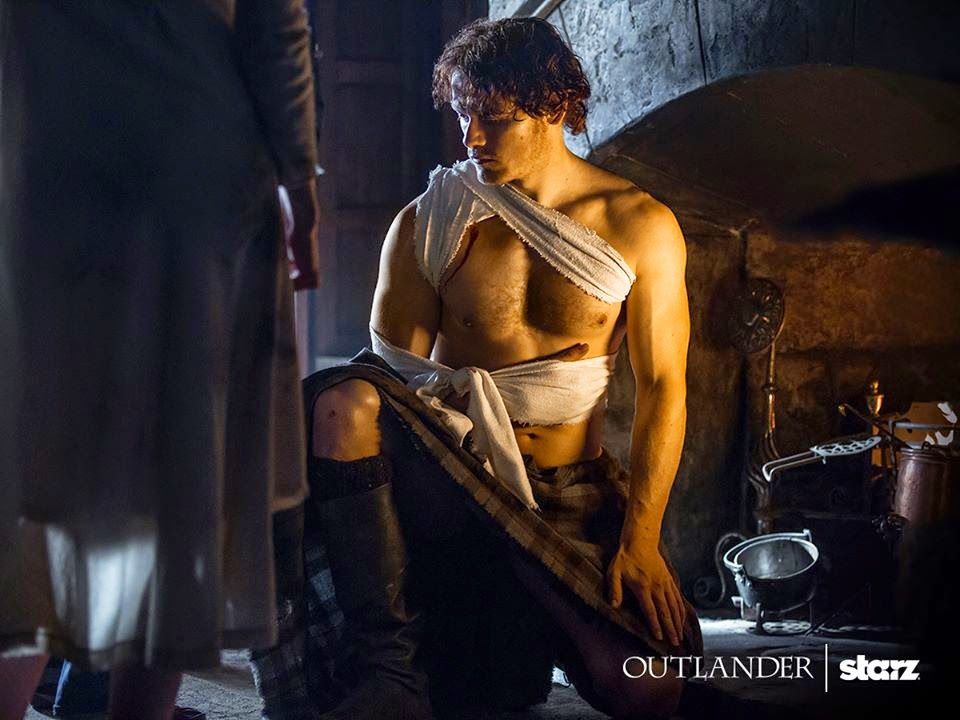 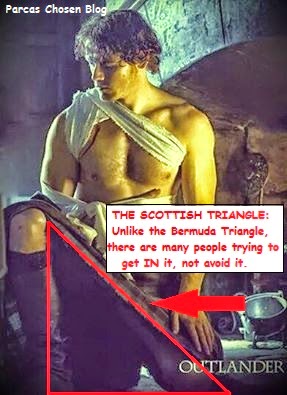 They are seriously upset because some fans want to ‘take a peek’…’ and say things like “Where is there a gust of wind when you need it?” and "Where is my magnifying glass?".

Sam is not, as they opine, embarrassed or insulted by this adulation. He is an actor who obviously loves the attention and gets VERY WELL paid to simulate sexual acts in front of millions of people, and to pose semi-nude on every flat surface known to man, and has done so for years. I don’t think Sam Heughan hates being a Sex God to the Hormonal Squad.

Listen…as long as women have breasts and men have penises, these issues will reign and even though one may argue that little things count, I cannot agree that these pics of Sam and the mildly saucy comments they inspire fall in that category. Not even close. Most fans love him as a package deal, not just a knee or a 6-pack or a set of lips. And to be honest, after centuries of men being in the Cat Calling Seat, women having their turn is Fate’s Comeuppance and it will eventually reach homeostasis wherein we can finally get rid of the saddle altogether. It will take time and patience and an ability to leave ones pearls in the jewelry box.

Do I find some comments juvenile and immature? Yes. Do I find some of them over-the-top and just plain stupid. Yes. But I find a lot of books and people that way too and you know what, I walk away from them and leave them behind without a second thought.

Tell your kids, your husband and your dog what to do but please, do not tell me whose guidelines I must follow. Thinking that you are somehow better and above those who enjoy a little adult fun only makes you a holier-than-thou liar because DEEP down inside, you KNOW you want that kilt to pull a Marilyn Monroe too. Go on. Admit it.


In fact, isn't it true that you are so pathetically in love with a fictional man that anyone talking about him (or his tangible persona) in even the slightest sexual manner galls the protective lover in you and you are simply lashing out?

You are suffering a severe case of Leave-My-Man-Alone-itis and need to get a grip.